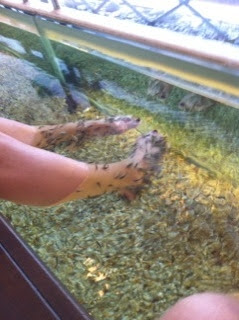 Singapore is a country rife with rules and regulations. You need a prescription to buy chewing gum! I’m sure the city-state has some of Asia’s highest health, hygiene and safety standards, so I figured that Orchard Road, the high-end shopping district, was the best place to try the infamous Fish Pedicure...
Don’t do it!!!  Of course, it was very clean and almost sterile, but when it came to actually sticking my feet in the water, which was teeming with slithery black swarming fishies, I almost couldn't do it.  Luckily, I had very brave and very insistent company who forced me to take a few deep breaths and unwillingly take the plunge.
Within seconds I was wearing a “fish boot.”  The little creatures had attached themselves to every inch of exposed skin and were happily chomping away.  It didn’t hurt but the feeling was awful- a thousand tiny fish tongues greedily sucking and licking away at my lower extremities.  After a tickly and torturous 10 minutes I was done.  To exit the tank you have to give your feet a vigorous shake to make sure none of the fish come with them out of the water.  Yuck.
Oh, and the worst part:  There are three different sizes of fish.  Being squeamish I stuck with the little guys which measured in at about two inches.  The medium sized fish were probably about three-four inches while the large fish were a whopping five-six inches and had big blood-red, toothless mouths.
at 3:38 AM